Murder
For many years now, I have been staunchly opposed to the death penalty, and after the shootings in , I am even more adamant about the issue.
I did not always hold that view, in fact, when I was an undergrad, I was fully in support of capital punishment.  Not only did I support it, I favored expanding it to child abusers, pedophiles and rapists.  I felt, and still do in fact, that we don't need people like that on the planet.  It was probably my only real flirtation with conservative beliefs.
My shift to being against the death penalty was not an instant conversion, but a slow evolution.  I started questioning it when I began to realize that proof is a moving target.  Eye witnesses can be wrong and circumstantial evidence can mislead.  In short, I began to become concerned that the things being asserted in the courtroom as absolute, incontrovertible fact, were often not.  This fear was borne out in the number of completely innocent death row inmates being exonerated by DNA evidence.
Also contributing to this shift was the realization of the racial inequality of the application of capital punishment.  Far more black men are sentenced to die than white men.  When you look at serial killers, who are mostly white, and even though this is the group that most certainly would deserve the death penalty, a very small number of them are actually sentenced to die.  On the other hand, black gang members, who's guilt I should note is often less certain than serial killers, are more likely to face execution.  If you look at the statistics of men currently sitting on death row, you will find that minorities far exceed whites, even though, by definition, they are a significantly smaller demographic group.  And I should note, statistically they no more likely than whites to commit murder.  Because of this, there should logically be many more whites on death row if there was not a racial component.
Additionally, I became concerned about the application of the death penalty to people who were mentally incapable of understanding what was going on.  This includes both the intellectually disabled as well as people who were legally children at the time of the commission of the crime.  Most appalling was the case of George Stinney who was executed at the age of 14 for a crime that almost certainly he did not commit.  Executing the incompetent and minors is in itself almost criminal
But my growing concerns went past the unequal and problematic application of the death penalty.  In researching this issue, I learned some disturbing facts.  First, there is no proof that executing criminals acts as a deterrent for anyone other than the specific person killed.  Certainly, someone put to death will commit no more crimes, but it does not impact the crime rate in any other way.  In fact, the only way that it would impact crime rates would be to begin to apply it to all crimes.  Essentially, if we killed all criminals, rather than paroling them, then we would actually affect crime rates.  But short of that horrifying and barbaric application, the death penalty does not really lower the amount of crime.  And even then, across the board life imprisonment would accomplish the same goal without resorting to state sanctioned murder.
Second, the is one of only two industrialized, modern countries that still perform executions; is the other one.  Our company in executions includes such human rights paragons as , , , , and .  In fact, other than Mother Russia, most of the former Soviet states such as , and the have completely outlawed it.  The rest have essentially a de facto ban on the practice.  For a country that prizes it's record on human rights, in this particular case, we seem to be hanging around with the wrong crowd.
Third, the death penalty is extremely expensive.  This seems a bit counter-intuitive, because once a person is dead and buried, there is no more expense, while housing someone for the rest of their natural life is an open-ended cost.  However, to work through the full slate of appeals, clemency hearings and other legal maneuvers necessary before an execution, decades can elapse.  A number of people on death row have actually died naturally before their executions.  Also, when you factor in the costs for all of those legal proceedings, the cost greatly exceeds incarceration.
publishes statistics on this cost.  The capital punishment system costs the state an average of $137 million dollars per year, and would cost $232 million annually if the system were made genuinely fair.  On the other hand, the cost of a life without parole sentence for the same group would run about $11 million per year.  In short, abandoning the death penalty would save that nearly bankrupt state somewhere between $126 and $221 million per year.
All of these factors, the possibility of executing an innocent person, the discrimination, the lack of actual deterrence, the types of countries that still execute and the incredible cost of the entire process have combined to turn me into an opponent of the death penalty.
And before I proceed, I want to point out an informal fallacy that many people throw at me about my beliefs, since I do support abortion rights.  They ask how I can reconcile my acceptance of "killing babies" with my opposition to executing criminals.  I actually had to work through that one, because I had always felt that, even though I disagreed with the Catholic Church on their positions, at least they were logically consistent in opposing both abortion and capital punishment.


However, I have since realized that this is a false equivocation.  Even though they seem similar on the surface, specifically both terminate life, they are actually quite different and cannot be equated.  The circumstances  surrounding the two result in an inability to compare them: for example, one is the government making the decision to end a life; the other is a woman having the right to control her own body.  You are not inconsistent to be Pro-Choice and anti-death penalty.  Similarly, you can be for Capital Punishment and Anti-Abortion.  The two are excusive situations and cannot be conflated.
That said, I want to return to why the massacre at the Century 16 makes me even more opposed to the Death Penalty, since that does not seem to be a logical outcome from those horrifying events.  Because James Holmes is obviously guilty, very likely sane, and the perpetrator of the worst mass shooting in American history, you would think if anyone deserved the death penalty, he would.  Even a staunch opponent to executions can see that this is a quantitatively different scenario than most death penalty cases.
And to that I would say, yes, he does deserve to die for what he has done, but sometimes we don't and can't get what we deserve.  And sometimes, we have to forego one satisfaction for a more significant, but less obvious one.
James Holmes should not face the death penalty because it will play into his hands of exactly what he wants.  I'm not saying he wants to die, in fact, I doubt he actually does.  What I do know he wants is publicity.  The fact that he did what he did, in the manner he did it in, and with his fixation with the Joker tells me that he is seeking the limelight.  He wants to be a villain on the order of the fictional Joker, and I do not want to see him get that satisfaction.
If he faces the death penalty, the trial will stretch on for a very long time, probably in televised hearings and trials, allowing him to put out his story and have his face plastered across every media outlet in this country and possibly the rest of the world.  Then, once the trial is concluded, and he is sentenced to die, we will have the mandatory appeals process, the Supreme Court review, the requests for clemency, the sanity hearings, and the rest of the circus that revolves around a death penalty case.  All of these things will keep him front and center in the news cycles.  His story will get told over and over.  And, given what I have seen so far, that's exactly what he wants.  He isn't spitting on guards to show his contempt, he's doing it to get another story in the paper.
His crime is narcissistic and evil.
And the best punishment for such a criminal is to sink into obscurity.  Let him become a nearly impossible trivia question for "Geeks who Drink."  Remove him from out national consciousness.  Don't hate him, because he will thrive on that hatred.
Forget him; it is the worst punishment we can inflict.
"In Heaven His throne is made of goldThe ark of his Testament is stowedA throne from which I'm toldAll history does unfold.Down here it's made of wood and wireAnd my body is on fireAnd God is never far away. Into the mercy seat I climbMy head is shaved, my head is wiredAnd like a moth that triesTo enter the bright eyeI go shuffling out of life
Just to hide in death awhile"
Nick Cave - "The Mercy Seat" 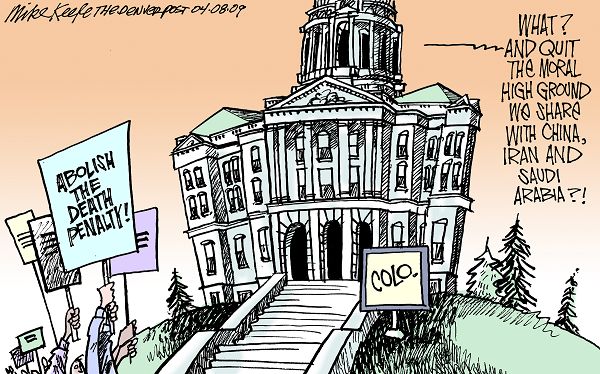