A Plague of Festivals

Uniformity
New York City, the last bastion of uniqueness, is falling victim to the blandness of Generica.  Go to Times Square and try to find something not corporately branded.  If Giuliani had allowed the hookers to remain, I’m sure that nowadays they would have corporate sponsorship and credit card readers.  (I can imagine Sephoria and Chloe investing in a line of perfectly groomed, elegantly dressed escorts walking 42nd Street.)
But that isn’t what concerns me.  Times Square sold out a decade ago, and most New Yorkers avoid the place unless they have out of town guests who insist on seeing it, and are too afraid to go unescorted.
What concerns me is a new phenomenon that I have not noticed in my previous visits or when I lived there.  Generic street festivals have sprung up all over Manhattan.  Last weekend, Madison Avenue was shut literally from Madison Square to 83rd St.  (It may have been closed further, but that was the distance I experienced.)  Also, Broadway was shut throughout  NoHo and Mulberry Street in Little Italy was almost impassible from the booths set up on both sides of the street.
I say the street fairs were generic because they had the same collection of funnel cake vendors, hot dog stands, bead and scarf booths, and crappy art.  There was no soul and no character to them.  All of them were virtually identical.  At the time I wondered why.
Unfortunately, now I know.
I found this information on Quora today.  This was posted by Jay Gurewitsch the owner of Arcadia (www.arcadianyc.com):
“These pestilential plagues that are visited upon our streets far too often are almost entirely run by one company; Clearview Festivals. They contract with various "non-profit groups" who officially get the permits from the city in exchange for a tiny percentage of the take from the vendors.


These vendors, by the way, are overwhelmingly based outside of NY for tax purposes - so they charge and collect no sales tax, pay no real estate tax, no NY corporate tax, no payroll tax, no commuter tax, nothing that could possibly reimburse the city for all the lost revenue the businesses on those streets suffer whenever the fairs are set up.


My tens of thousands of taxes paid as a business owner in Chelsea ($50K+ in real estate tax alone) go to subsidize a street fair and street vendors who steal thousands of dollars PER FAIR from me and all my neighbors - and there is seemingly NOTHING we can do about it.”
In our lust to corporatize everything, we erase all character and individuality.  Everything is a brand, or more frighteningly, a uniform identity.  The City is becoming a copy of a copy of a copy, blurred to indistinguishiblilty and lacking any semblance of originality.
Is there any hope for authenticity?  When will we as a nation again demand it?  When will we stop giving our souls away for profit? 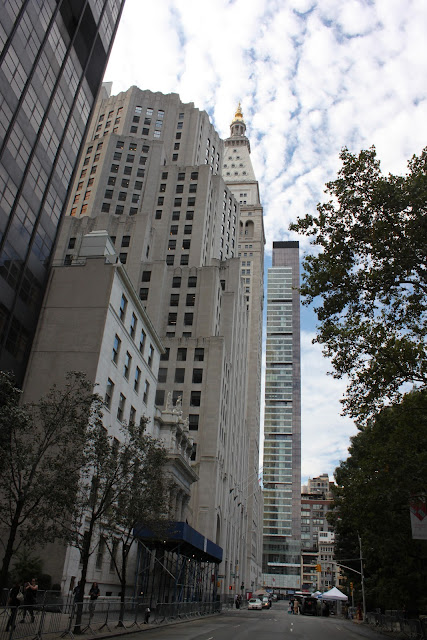 Setting up for the "Street Festival" on Sunday Morning.
Posted by Scott Sworts at 12:47 AM