Congratulations, You Have a New Behavior Pattern

There are two ways for a person to reconcile and come to terms with fear: contemplative sublimation or the fear - anger - hate chain.

The first method requires a strong epistemology, which at it's core is the ability to know what we know.   This method of catharsis (purging yourself of fear) forces you to examine your fear, asses it's validity, come to terms with it, and ultimately purge it from your system.  In short, you move on from your fear - you get over it and get on with life.

Although this sounds easy, it is actually one of the hardest things for a person to do.  Most people lack the self awareness to sublimate fear.  Understand, that by saying this, I am not being derogatory, I am saying that we typically do not teach people the tools to do this.

Lacking these skills, most people revert to the other method: the fear - anger - hate chain.   This is a root structural behavior, just a step above being instinctual.  For proof of this, look at animals.  A dog may be afraid of the vacuum when it's running, then he gets angry at it and attempts to attack it.  Eventually, he comes to hate it and attacks it the moment he sees it.

I discussed this chain in my post about "Southern Nice" which is a phenomenon observed by my friend Patrick where in the South, hate gets cloaked by this false veneer of "nice."  In the South ingrained ideas are under challenge, which leads to fear, then anger and culminates in hate.

I'd like to explore this process in a bit more detail, because there are aspects of this cultural artifact that I did not address in the previous post.

As I said before, the South was a insulated cultural ecosystem basically until the invention of air conditioning, at which point the sphere of isolation was ruptured.  This brought new ideas into the South, ideas that challenged fundamental belief systems.

Because of the effects of enculturation, these different attitudes sparked fear.  These attitudes raised questions about the validity of the way things were done in the South, which challenged the naturalized culture.  One of the things about naturalized culture is that it is not examined, it is accepted as Truth.  When you question Truth, you knock the foundation out of a society, which is what happened in the South during the Civil Rights era.  You had new attitudes about race, about class mobility, about religion, and ultimately about peoples' role in society.

This digging away at the bedrock of Southern Society undermined the entire cultural edifice in a way that had not happened since the Civil War.  And in fact, it was worse in a way, because after the Carpet Baggers left, Southern Society for the most part reverted back to an Antebellum mindset.  Jim Crow laws, poll taxes, sharecropping and segregation replaced slavery, but in general allowed the South to continue in much the same way that they always had.

In the Civil Rights Era, the influx of cultural challenge did not come from Carpet Baggers, who were destined to leave in a short time, it came from sources that would never leave, internal immigrants and televised media.  This time, the questions and the fear were not going to go away.

There could have been two ways the South responded; sublimation or anger/hate.  The first was highly unlikely from the start, it is hard enough for an individual to achieve this, let alone an entire culture.  (Ireland still hates the English 400 years after Cromwell) This was also unlikely because of the basic nature of Southern Culture, rooted in the philosophy of the Southern Baptist chuch, which takes Truth as an unquestioned absolute.

And when you question that which your culture tells you cannot be questioned... you get the picture.

Hence, we are left with only one possibility for the resolution of fear anger and hate.  Anger is a good short term solution for fear; it gets people through a short burst of terror, but it is wholly unsuited for an unending dread caused by the systemic undermining of cultural foundations.  Hate becomes the perfect armor to protect from this type of fear.

"I hate them because they are wrong and they are evil.  I am good and I am righteous, and I am shielded from their evil by my hate."

Throughout history, this is the typical response to cultural threat.  It leads to war, to genocide and any number of other horrors, and this hate crystallized in the Southern Soul.

But there is something peculiar to Southern Culture, gentility.

The South held on to the aristocratic traditions of etiquette and courtesy  present in the Colonial era far longer than the North did.  It should be noted these traditions arose from the Dueling societies of Medieval Europe, where if you were discourteous, you would end up dead on the field of honor.  Because the South maintained the trappings of this culture, etiquette and courtesy became part of the naturalized culture.

The fear - anger - hate progression was kicked off by cultural challenges, but courtesy is at the core of the culture in question.  Therefore, overt hate is not an option, because it leads to an irreconcilable internal paradox of abandoning your enculturation because your enculturation is being challenged.

Thus is born "Southern Nice."  Southern Nice allows people to maintain their cultural norms, while sending out an encoded message that lies beneath the surface.  It becomes a complex mechanism to respond to a significant threat, while still keeping a veneer of socially acceptable behavior.  This layered meaning allows them to mask their hate and disdain in a way that does not further undermine their cultural belief structure.

It is a natural response. 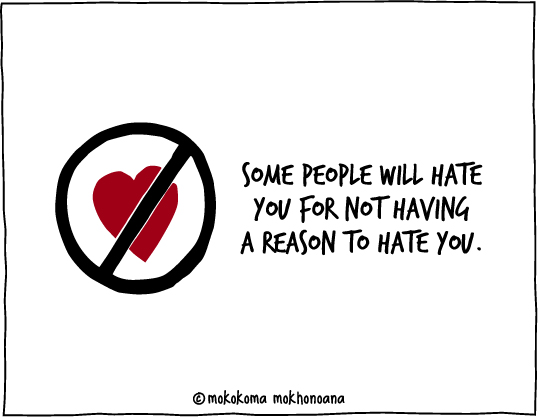