History is Written by the Victors

This is not a new idea.

It was most forcefully stated by George Orwell in his book “1984,” where he created a new version of English, which he called “Newspeak.”  In Newspeak, the language was revised to control discourse.  For example, there was no longer the word “bad.”  Bad was replaced by “ungood,” which as the Party states, is more precise word, because it is the exact opposite of good, whereas bad is a fuzzy term in comparison.  Also removed were better, best, worse and worst.  They got modifiers of plus and doubleplus.  Therefore, better became plusgood, whereas worst would be doubleplus ungood.

Newspeak was a primary method of how the government of Oceania controlled the population.  By reducing language to a pale shadow of itself, “wrongthink” could be weeded out and thoughtcrime could be made more difficult.  If you have no words to enframe a concept, it becomes extremely difficult to have that thought.  This is because most people over the age of three think verbally rather than pictorially.  (There is an exception for the autistic, who tend to think in images throughout their lives.)

For example, Entitlements.  This is what we now call Social Security, Medicare, Medicaid and Welfare.  Entitlement has a strong negative connotation in America; we do not tend to like people to feel entitled to anything.  This plants a seed of disapproval toward the programs described by the word, and the less likely we are to use the program, the more we disapprove of it.

This is a factor of human nature; we all know we will need Medicare and Social Security, so the negative enframement is less potent, than it is with Welfare, which we tend to view as something “other people” get.  And depending on your geographic location that “other people” idea can have its own negative connotation…

Terming these programs “Entitlements” creates negative feelings toward them, whereas, if they were called “Safety Net” programs, we would feel much more positively about them.  Everyone wants a “Safety Net.”  This enframement of the discussion would make us feel more positively toward even the programs we are not likely to use ourselves, because we would view them through the filter of something there to protect us in case we needed it.  It would shift the discussion.

This is the power of language.

In addition to the power of connotation, language can carry hidden meanings that are also cultural constructs.  For example, when people call Obama “arrogant,” they are making a very specific statement that has extra meaning in the South.  In the South, when you call a black man arrogant, you are saying he is doing something that he has no right to do, that he is challenging the natural order of things, that he is rising above himself.  In most parts of the country arrogant means just that, but to others, it has a hidden dimension of racism.

By controlling the conversation through specific, targeted word choice, you can control attitudes and ultimately, events.

Now to my main point; pay close attention to how the media is enframing the events in the Occupy movement, and contrast them with how they covered the Tea Party.

They described the Tea Partiers as “fed up,” as “patriots”, and as “average Americans.”  They described their events as “rallies,” occasionally as “marches,” sometimes as just “gatherings.”  Occasionally, they would call them “protests,” but that was as strong of a term as they used.

All of these terms are, on the whole, positive.  The mainstream media used very bland to somewhat positive language to describe the Tea Party.  Aside from some fairly strong condemnations of them on MSNBC, there was very little said about them that were negative.  (And yet, even that small amount of negativity was enough to brand the media the “Lamestream Media,” which is another example of how the dialog is being controlled.)

For the most part, the media gave the Tea Party a pass, even though there were some incidents.  A perfect example of this was someone spitting on a congressman as he walked by a protest outside of the Capitol on the day they passed healthcare.  (Obamacare, does the enframement never end?)

The press does not spend much time covering the demands of the protesters, and when they do, they minimize that coverage.  They devote most of the air-time to salacious details of cops beating the protesters, while giving the impression that they deserved it.  The message gets stifled under the weight of negative coverage.  And compare that loss of message with the coverage of the Tea Party.  Their demands were broadcast loud and clear, into every home with a television.

Everyone knows what the tea Party is calling for, while few know what the Occupy Movement stands for.  (And the media helps further this as well calling their demands incoherent, and saying they don’t have a message.)

It is time to put an end to this editorializing from the media.  I understand that the large corporations that run the press have a natural sympathy to the Tea Party, and a natural animosity to the Occupy movement, but lets bring some balance back to the coverage.

I’m not calling for the reinstatement of the “Fairness Doctrine,” although it would be nice.  (Especially to see Rush Limbaugh and Glenn Beck have to have someone on their shows to present the other side.  I’d suggest Keith Olbermann, but only if there was a video camera to capture the bloodshed.  I put my money on Keith.)

But more realistically, I am calling for the press to have one standard that applies to both sides.  Either condemn both, or lob softballs at both, but be consistent.   It is fine if both sides get equal scorn in the media.  It is better though if the press treated the subjects with the same degree of impartiality that the BBC uses. 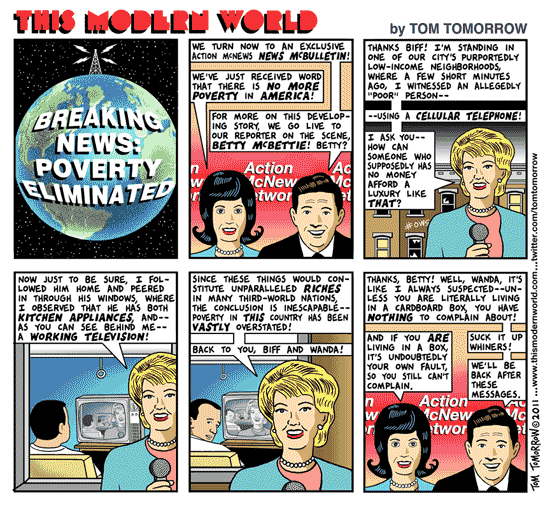