I just found out, according to Mark Driscoll, pastor of Mars Hill Church in Seattle, that I am homosexual.  This was an amazing shock to me, as I have always considered myself to be straight. (but certainly not narrow)

Don’t laugh; if you are a male past approximately the age of 12, you are also gay.  We have achieved 100% homosexuality in the male population.   How has this happened?

We are defining deviancy downward to make people afraid of their own bodies and their natural sexuality.  It is a form of control, to make you ashamed of the actions that someone else does not approve of.  Shame is the most potent weapon to make people do what you want them to do.  It is so powerful that early societies used shunning to guarantee appropriate behavior - it is almost universally effective.

When you make people ashamed of their actions, you gain a foothold over them, one which can be exploited to get more holds.  You also get people to monitor the activities of those around them, to find out if they are sinning, and to denounce them if they are.  You turn people against each other, and you maintain power over the group.  They are classic control mechanisms.

In other news, Daniel Avila wrote in the county’s oldest Catholic newspaper, “The Pilot:”

Disruptive imbalances in nature that thwart encoded processes point to supernatural actors who, unlike God, do not have the good of persons at heart.

In other words, the scientific evidence of how same-sex attraction most likely may be created provides a credible basis for a spiritual explanation that indicts the devil...

...whenever natural causes disturb otherwise typical biological development, leading to the personally unchosen beginnings of same-sex attraction, the ultimate responsibility, on a theological level, is and should be imputed to the evil one, not God.

On the one hand, I guess I should be happy that an Assistant Director for the U.S. Conference of Catholic Bishops accepts the possibility that homosexuality is nature not choice.  On the other hand, it scares me that he is actually stating that the Devil fiddles with genetics to make people gay.  (I have a picture of the Devil working in a genetics lab, laughing diabolically, (since that’s the only way he can laugh) as he creates a “gay virus” to infect unborn babies.)

These attitudes need to stop.

It has been my experience that most of the people that I have met who violently hate homosexuals do so out of concern that they might be gay themselves.  I am not saying that they are actually gay, just that they might be afraid that they are.  Maybe they had a stray erection in the shower in high school, perhaps they had gay dream, possibly, it was just a simple intrusive thought, but somehow, they became afraid that they were gay.  And rather than address the issue head on, and determine if they are or if it was just one of those things, they react brutally.

They are so afraid that they might be gay that they must stamp out all homosexuality.  That way, when there are no homosexuals left, they will not be tempted anymore.

This brings up an odd point about human sexuality, when we are afraid of something, we often fetishize it, which then rewires the brain to make us embrace that which we fear.  We become a walking paradox, and the effort to stamp out homosexuality actually reinforces those drives.  Hence, the vast number of homophobic politicians and preachers caught in gay scandals.  They literally drive themselves to do it.

And I think that’s what any loving, caring God would want. 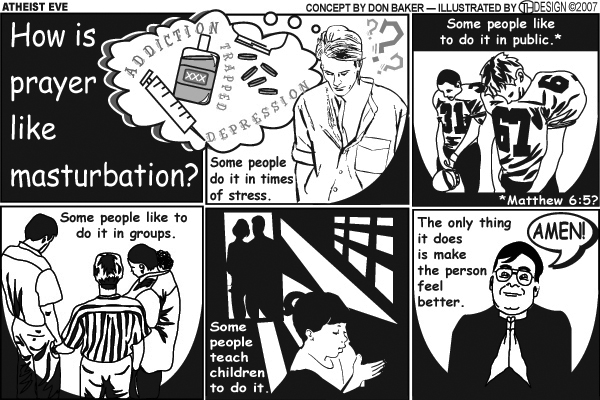