Discrimination
Freedom of Religion does not equate to an authorization to discriminate in the name of God.
Recently a baker in Iowa refused to make a wedding cake for a lesbian couple, on the grounds that she is a Christian.  Victoria Childress, the owner of Victoria’s Cake Cottage stated, “I didn't do the cake because of my convictions for their lifestyle. It is my right, and it's not to discriminate against them. It's not so much to do with them; it's to do with me and my walk with God and what I will answer [to] Him for.”
Wind back the clock fifty years.  In the fifties and sixties, at the height of the civil rights movement, the same comments were frequently made in regards to mixed-race couples.  It was not uncommon to invoke God in a discussion of the immorality of interracial marriage.  Go back an additional twenty years, it was invoked for Jew-Gentile pairings; in the 1800’s, any marriage with someone who was Irish and someone who wasn’t.
God and morality are constantly employed to justify discriminatory attitudes, and freedom of religion is the foundation of that justification.  “I understand I’m being (whatever the discrimination du jour is) but I have to answer to a higher power.  This (action) goes against God.”
First of all let me remind you of Matthew 7:1 “Judge not lest ye be Judged.”  Also Mark 24:4 “For with what judgment ye judge, ye shall be judged: and with what measure ye mete, it shall be measured to you again.”  The Bible makes it pretty clear, at least as far as the Judeo-Christian ethic is concerned, that God is the only one who has the right to Judge.
This means that mere mortals cannot actually have any authority to judge the actions of another; we are only responsible for controlling our own behavior.  The laws laid out are for us to govern ourselves, not others.  (It’s that nasty free will stuff again.)
More importantly though, the Bible has been invoked for centuries to justify the horrific treatment of our fellow humans.  It was the basis of the Crusades (Deuteronomy 13:15 Thou shalt surely smite the inhabitants of that city with the edge of the sword, destroying it utterly, and all that is therein, and the cattle thereof, with the edge of the sword.)  It was used to endorse slavery.  (Genesis 9:25, Cursed be Ca'naan; a servant of servants shall he be unto his brethren.)  It was employed in the fight against Women’s Suffrage (Colossians 3:18 Wives, submit yourselves unto your own husbands, as it is fit in the Lord.)
These attitudes are horrific, and most Christians today rightly reject them.
And yet, we still use the cloak of Religious Freedom as a means to engage in despicable behavior.  That is not its intent.  The First Amendment guarantees that there will not be a state sponsored religion.
The Wall of Separation, first defined by no less that Thomas Jefferson, states “government must be neutral among religions and non-religion: it cannot promote, endorse, or fund religion or religious institutions.”  In other words, one religion cannot be promoted over any other.  To take an Evangelical belief that homosexuality is a sin over other religious views that accept it violates the Wall of Separation.
It seems that the religious right wants to enshrine their specific version of Christianity as the law of the land.  They do this while at the same time denouncing any possibility of Sharia Law being acknowledged.  Religious law is religious law; all of them are prohibited by the First Amendment.  Jewish, Christian, Muslim, Hindu, or whatever, you cannot base American Law on any religious text.
But back to the specific issue at hand; the First Amendment is not acceptable grounds to refuse service.  This battle was fought in the sixties when segregation was finally excised from society.  In 1960, it would not have been news that a baker had refused to bake a cake for a mixed race couple.  In 2009, it was news when a county justice of the peace refused to marry a black man and a white woman.
We are fighting the same battles today, just with different victims.
It is OK that the Victoria Childress holds her views, that is her right.  She can believe whatever she wants to believe.   That is freedom of religion.
What is not right is to allow those personal beliefs to guide her in the refusal of providing the service she is in business to provide.  If she does not want to serve all customers equally, without discrimination, perhaps she should consider closing her business, so that she does not have to violate her beliefs.  That is also freedom of religion – to say that I’m not going to play.  It would be sad, but it would be her right.  And in point of fact, that was an option that many businesses invoked after the end of segregation, they closed their doors rather than being required to serve the African-American community.  (It's amazing what narrow mindedness will provoke.)
What is not freedom of religion is to invoke God as a “get out of jail free card” to justify discrimination.  Her religious freedom does not extend to discriminating against people engaging in a legal activity, which in Iowa, gay marriage is.
We would not permit it if the couple involved were of different races or religions, why is it OK to do so when they are the same sex?
It is time for us as an enlightened society to say enough – we are done with discrimination, no matter what the justification is.  We need to stand together.  We need to recognize that we all have different beliefs, and we need to stop imposing our own beliefs on others.
Especially when all the others are doing is committing an act of love. 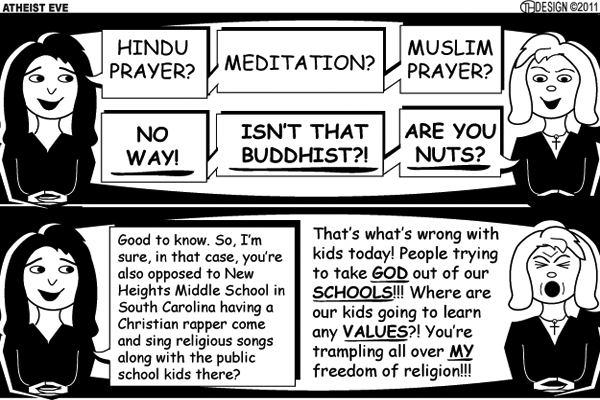