In the Name of God

There is a strong movement in the Evangelical circles that is promoting child abuse as Godly and the right way to raise a child.  We are not talking about simple spanking, which is a debate that I am not going to address here, this abuse moves into the realm of beatings and whippings, and even death.

This trend in the Christian Right has gotten a lot of airplay in the last week or so because of William Adam’s brutal whipping of his 16 year old daughter.  Adams claims he did nothing wrong, that he was merely disciplining his daughter.

Discipline?  Have we lost so much humanity that a brutal whipping can be called discipline.  Have we reverted to a Dickensian Universe where out and out abuse is justifiable?  Have we forgotten that we live in a era where children are no longer chattel?  Have we gone so far that we can beat a child to the point that they die, all in the Name of God?

Apparently, the answer is yes.

Spurred by numerous books by “Christian” writers, child abuse is being promoted as the “Righteous” way to bring up a child.  One of the “bestsellers” is a book by Michael and Debi Pearl called “How to Train Up a Child.”

I have to insert here, even this title offends me.  “Train Up” sounds like something you would do to an animal.  We raise our children, nurture them, we don’t train them like a performing monkey.

The scariest part, this book has sold close to 700,000 copies.  Just for comparison, Dan Brown’s bestseller, “The Lost Symbol,” sold just over a million copies in Hardback, with the full weight of media promotion behind it.  700,000 copies for a self published book, with minimal promotion, is an incredible total.

It also means that almost 700,000 parents are raising their children with these frightening techniques.

Among them, “use the Rod to teach toddlers to submit to authority.”  Pearl frequently compares this to “the same principles the Amish use to train their stubborn mules.”  First, lets ask, is it actually OK to beat a TODDLER with a stick?  A child who does not even have real language or the ability to run away from the hell being unleashed upon them can be beaten with a stick?  Second, are children held in no more regard than MULES?

And as a side note, I doubt the Amish beat their children like they beat a beast of burden.
The Pearl’s advocate the weapon of choice for this brutality to be a 15 inch long piece of plumbing line, because it can be rolled up and carried in the pocket.  I guess so that you are always ready to whip your child the second that they step out of line.

The Pearl’s advocate using a switch on children as young as six months old.

You read that correctly.

A six month old has no cognitive capacity to understand what is happening.  To the infant’s mind, all they perceive is that the people who feed them and care for them have suddenly turned on them.  They do not have the ability to judge cause and effect; they cannot build a causal connection between behavior and punishment.  And besides, what can a six month old do that merits a beating?  Cry?  Poop?  Spit up?

An infant by definition cannot misbehave.  Even the church agrees that the soul is destined for heaven until free will commences, somewhere around the age of three, by their catechism.  If your soul is heaven-bound at six months, what can you do that would deserve a whipping?

Another horror that the book espouses is starving your children for misbehavior.  Pearl states “a little fasting is good training.”  Training for what; the anorexia that you will develop later in life because of the self loathing that these nightmarish techniques inspire?

And these techniques have lead to deaths.  From the New York Times:

In the latest case, Larry and Carri Williams of Sedro-Woolley, Wash., were home-schooling their six children when they adopted a girl and a boy, ages 11 and 7, from Ethiopia in 2008. The two were seen by their new parents as rebellious, according to friends.

Late one night in May this year, the adopted girl, Hana, was found face down, naked and emaciated in the backyard; her death was caused by hypothermia and malnutrition, officials determined. According to the sheriff’s report, the parents had deprived her of food for days at a time and had made her sleep in a cold barn or a closet and shower outside with a hose. And they often whipped her, leaving marks on her legs. The mother had praised the Pearls’ book and given a copy to a friend, the sheriff’s report said. Hana had been beaten the day of her death, the report said, with the 15-inch plastic tube recommended by Mr. Pearl.

And there have been others.  Pearl’s book has been entered into evidence into at least three recent cases where child abuse ended in murder.

And all of this is laid at God’s feet.  It is the “Christian” thing to do.  As Pearl says, “To give up the use of the rod is to give up our views of human nature, God, eternity.”

The Pearls are not the only Christian leaders advocating child abuse in the name of God.  James Dobson states that “Beating is the way God wants mothers and fathers to discipline their children from Toddlerhood on.”  He wants America to move away from the “Liberal” trend of not engaging in corporal punishment.

Apparently not beating the living tar out of your children is another evil of being liberal.

And here I thought all this time that child abuse was evil. 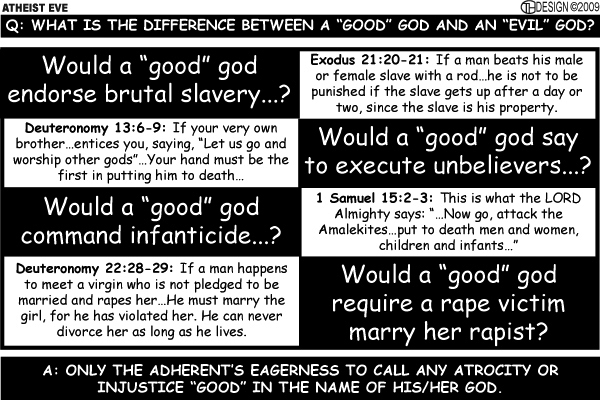