The Age of Personal Responsibility?

Blame Game
According to Herman Cain, if you are poor or unemployed, you only have yourself to blame.  He said, “Don’t blame Wall Street.  Don’t blame the big banks.  If you don’t have a job and you’re not rich, blame yourself.”
That reminds me of a recent incident where Kathleen Passidomo, a Florida GOP lawmaker said, “There was an article about an 11 year old girl who was gangraped in Texas by 18 young men because she was dressed up like a 21-year-old prostitute.”
Is this America of the 21st Century, blame the UNEMPLOYED for their unemployment, and blame an ELEVEN YEAR OLD GIRL for her own gang rape by EIGHTEEN MEN?  (Sorry about the all caps, I can’t actually scream in a blog post.)
Are we now at the point where everything bad that happens to you is your own fault?  (And yet, these same people say that if you have anything good happen to you it all comes from God, and you should thank Him for all the blessings in your life.  I guess consistency really is the hobgoblin of small minds.)
First, let’s examine the implication of one part of Herman Cain’s statement.  “If you’re not rich, blame yourself.”  He’s implying that the only reason you aren’t rich is that you’re lazy.  This shows an appalling lack of understanding of basic economic theory.  If you aren’t rich, it’s because the delimiter of wealth is not actual money, but relative positioning compared to others.
If everyone had at least million dollars, which is moderately wealthy, then having a million dollars would not have a lot of value.  Inflation would take the cost of goods and services to the point where a million dollars became poverty.  A hundred years ago, a salary of $20,000.00 per year was an incredible amount of money; today, it is below the poverty line.  Monetary value equalizes with the base standard of living.  The more people who have a million dollars, the less a million dollars is worth in actual value and purchasing power.
The idea that everyone can be rich is a never ending treadmill, because there will never be more than a small segment of society that is rich.  Rich is a relative, not absolute, position.
Now let’s look at the other part of his statement, “Don’t blame Wall Street.  Don’t blame the big banks.  If you don’t have a job, blame yourself.”
Really?
So all of the unemployed in America are at fault for their own unemployment?  It is their fault that the factory they worked for closed up and moved to China?  I guess in Republican-land it is.  The factory moved because the American workers were unwilling to work in extremely dangerous jobs with ridiculous hours for almost no money.  Since the workers were unwilling to submit to virtual slavery, the company had no choice but to relocate to a place where people would.
I guess that people are also to blame for their own unemployment because, since they have no money coming in, they chose not to go out and spend.  Since they chose to be responsible, and not spend money they don’t have, they drive down demand, which reduces the work force.  And this attitude is coming from the very people who demand that the Federal Government stop spending?  (Really, never underestimate the power of the human mind to hold two completely contradictory ideas simultaneously.)
Apparently, the fact that the big banks and Wall Street are currently sitting on more capital than they have ever had is not a factor.  The refusal of the Masters of the Universe to invest in America is not responsible for this mess.
Really? (I know I say that a lot, but when dealing with this type of ideology, all I seem to be able to do lately is smack myself on the forehead and groan.)
I guess we all need to kneel before the throne of the Masters and give thanks for the few crumbs they throw our way.
Occupy Wall Street is a legitimate movement filled with young people who see their future being stolen from them by greedy old men.  They are not people who are lazy, they are people who have few, if any, opportunities to improve their position.  (The protesters are demanding some things that I don’t agree with, such as ending the Federal Reserve, but I understand their rage.  And to a great extent, I agree with it.)
I want to end this with an observation.  When you have an entitled UPPER class, that shows the lower classes wonders that those people will never be able to possess, you set the stage for revolution.  When the poor and middle class see their leaders spending millions at Tiffany’s, and they can’t even pay the electricity or the medical bills, they WILL rise up.  That is basic social theory at work.  The only question at that point is, will the revolution occur at the ballot box or in the streets?
You have been warned. 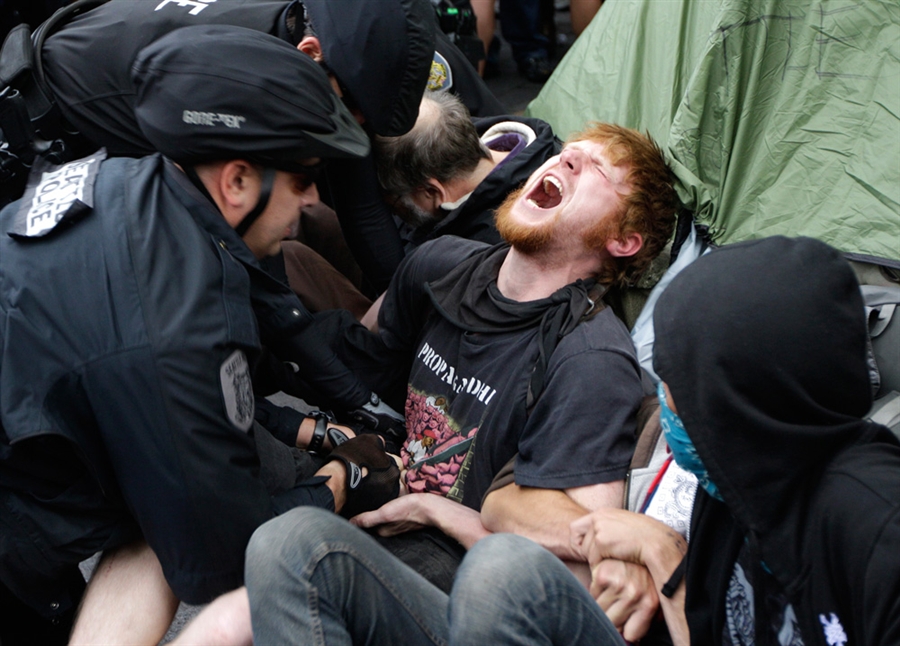 Police break up an "Occupy Wall Street" protest in Seattle.

Standing in water, yet dying of thirst
This is my thanks and this is my curse
Empty forgiveness for old indiscretions
And such condemnation for just one transgression

Waiting for time to pass me by
Waiting for freedom, waiting to die
Why do you smile at my timeless ordeal here
And why do you laugh at my hopeless appeal for your mercy?


Tantalus by Arena
Posted by Scott Sworts at 9:00 AM