The Weighing of Worth

Sacred
When is life sacred, when is it profane?  Is all life valuable, or are some lives worth more than others?
Apparently in the America of the New Century, the answer is yes.
Some examples of the worth of lives:
A fetus is more valuable than a baby and definitely more valuable than a woman.
A zygote is worth more than an adult.
A senior citizen is worth more than a school age child.
A wealthy person is worth more than a poor person.
Any white middle age person is worth more than any minority, regardless of the achievements of said minority.
Examples of this in the news of the last few days:
In Florida there was an anti-abortion protest where the demonstrators were holding up signs saying “Kill women, not babies” (Does this mean that we should kill all women prophylacticly to prevent them from getting an abortion?  By the way, thanks to Patrick for this suggestion.  Read his blog post here:Would Bringing Back Post-Natal Abortions Fit with Your Ideology? )
Alabama is attempting to pass a law that would ban most forms of birth control (Just go ahead and actually criminalize all sex that is not for procreation, since that wastes the potential life of the sperm, and while you’re at it ban menstruation since that unfertilized egg could be a life.)
In order to win Tea Party support (Mostly older Americans) Mitt Romney, in the Republican debates, He said large class sizes are not a problem and that Pell Grants should be eliminated.  (Meanwhile, in Oregon, a rural school district superintendent now is responsible for cleaning the restrooms because the school budget is slashed so completely.  Why not just close the schools entirely; what kind of education do you need to be a fry cook?)
JP Morgan Chase donated 4.6 million dollars to the New York Police Department immediately after the Occupy Wall Street Protests began.  This donation is the largest in NYPD history, and very interesting considering the destination of the Brooklyn Bridge March was the Chase Manhattan Plaza.  (And sometime after the brutal police assault on the protesters, Chase CEO Jamie Dimon said that they hope the donation shows how much they value the police department’s “hard work.”  Beating innocent protesters is so difficult, and takes so much out of a person.)
Dick Cheney demands that the Obama administration apologize for criticizing their use of torture.  (I guess that Obama, who banned torture, yet somehow got BinLaden, Al-Awlaki and so many other senior Al Qaeda operatives, and has repeatedly stopped significant terrorist plots, gets no credit for this.  If Cheney hadn’t ordered the torture of Khalid Shaikh Mohammed all those years ago, Obama would not have been able to dismantle most of the leadership of Al Qaeda.  Apparently, Obama’s leadership and intelligence operations had nothing to with any of it.)
And while we’re at it, stop comparing people to Hitler, like Hank Williams Jr. did recently when he said  “That would be like Hitler playing golf with Netanyahu… They're the enemy... Obama! And Biden! Are you kidding? The Three Stooges.”
Until you have incinerated something on the order of six million people, you don’t even come close to the horror that was Hitler.  It doesn’t matter what your political affiliation, or who you are trying to demonize, calling someone Hitler belittles the Holocaust, and minimizes the horrors inflicted at that time.  Comparisons to Hitler must be reserved for the most evil despots, if even then.  That monster represents the worst evil of the last two centuries.  (With Stalin a very close second.)
It seems that our priorities are not just screwed up in this country, they have been completely upended.  The New York Times is engaging in revisionism only previously imagined in the book 1984.  The government is robbing the poor to give money to the rich, and then when the poor complain, they condemn the “class warfare.”  The police are setting up protesters to entrap them and arrest them for engaging in their first amendment rights.
Its time for us to demand our rights again.  We can no longer stand by idly and watch our country be dismantled.  The time has come to take back the dialog and call out the behavior of our leaders and those who would wreck our country.  We can no longer allow them to control the dialog.  It’s our country too. 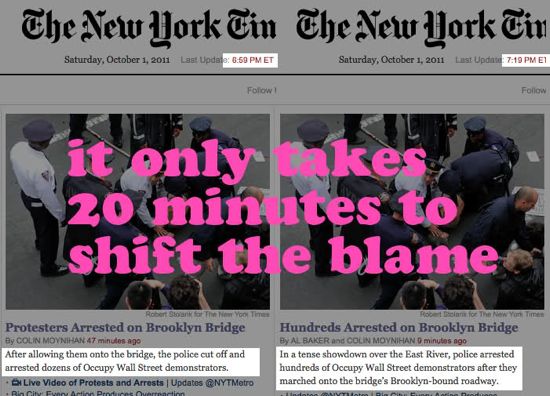 The strange historical revisionism that the New York Times committed.  It is worthy of Minitrue.
Posted by Scott Sworts at 9:09 PM